skip to main | skip to sidebar

My friend David died on July 6.  He had open heart surgery and was in the hospital for a week. They agreed to his request to go home,  although they recommended he go to a skilled nursing facility to get stronger. David was insistent.  He loved watching the deer and foxes and turkeys and quail that came on his patio and the majestic views of the hills beyond his home. We had decided to get him at-home help after I left, but it was clear over the course of the day that he really needed to go to a facility and he said he would do it in the morning.  Morning never came.  He dropped dead in front of me as he was getting back to his chair for the night.  The paramedics couldn't revive him. I'm still processing my loss.  I already miss our nearly daily phone conversations.

Let me tell you a bit about our relationship.  I met him in 1974 when he was working on Underground Coal Gasification at Lawrence Livermore National Lab and at a meeting on that topic at Fallen Leaf Lake, we went sailing together and got drenched from a sudden rainstorm that appeared over the Sierra Nevada, but he insisted on sailing the small boat back to shore in spite of wind and rain and the offer of a tow.  We dated briefly, but I moved on to Denver, then Washington, DC then Vienna.  David needed to have someone in his life every day.  He couldn't be alone after dusk and he did not want to marry again after two failed marriages and a failed live-in relationship, but he really needed someone to be present with him at that time of day.

When I returned from Vienna he had just started going with a lovely woman.  They each had their own homes, but he had someone to spend the evenings with, to go out to dinner with and  to travel with.  He even rented a room in her home so he had a place to stay overnight. Since her health began to seriously deteriorate a few years ago, he found other ways to fill this need like taking friends from his church to dinner and/or dancing.

David and I began our weekly brunches after my return from Vienna.  On Saturday, after he played tennis, we would meet for food and conversation, and what conversations they were.  David was interested in researching health issues and I designed a web site for him to put his findings.  It turned out I also had to upload his files for him as well, although I could manage to get him through the process over the phone as well.  He had quite a following and was active in holistic health circles.

David came to my graduation from Seminary and to my ordinations and when I moved around to do my interim ministry we started what became daily phone calls to continue our conversations.  Since I've been in Maine he has talked about moving here, but he really didn't want to leave his beautiful home.  We spoke about traveling together after he recovered from his surgery and I finally retire from ministry, but alas that is not to be.

Stop all the clocks, cut off the telephone.
Prevent the dog from barking with a juicy bone,
Silence the pianos and with muffled drum
Bring out the coffin, let the mourners come.

Let aeroplanes circle moaning overhead
Scribbling in the sky the message He is Dead,
Put crêpe bows round the white necks of the public doves,
Let the traffic policemen wear black cotton gloves.

He was my North, my South, my East and West,
My working week and my Sunday rest
My noon, my midnight, my talk, my song;
I thought that love would last forever, I was wrong.

The stars are not wanted now; put out every one,
Pack up the moon and dismantle the sun.
Pour away the ocean and sweep up the wood;
For nothing now can ever come to any good.

David was a unique character:  full of enthusiasm and boundless energy.  He was constantly thinking outside the box and when he decided something was right, you couldn't get him to change his mind.  The world has lost a very good and very creative man.  Did I love him?  Yes.

Farewell my good and faithful friend.  Let light perpetual shine on you and there be no more fear of the night.
Posted by motheramelia at 10:16 AM

PseudoPiskie, I can use the hug. Thank you.

So sorry to hear about David. May you forever keep the wonderful memories of your friendship. Hugs from as well.

{{{Amelia}}} from me, too. Even though we know we are subject to recall without notice, we are still shocked when it happens. All comforting thoughts, prayers and wishes for you.

Sometimes it seems to me that the Universe and everything in it is a vast, self-consistent dream in the mind of God. Maybe God just woke up from dreaming of being Dave, at least in this universe.

Thank you Brian and Scooper for the hugs. Scooper I chuckled to consider there could be a David in another universe. If so God really has a great sense of humor.

Amelia, I am so sorry for your loss. In your latest post you speak of wanting to reach for the phone to talk to David. I know the feeling. It happened to me for quite a while after my sister Gayle died. I pray for you and for all who loved David.

May David rest in peace and rise in glory.

Thank you Mimi. I know time is necessary for healing, but living in the present sucks. 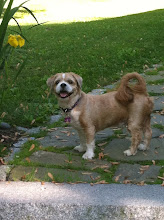 Taking over for the late Izzie

motheramelia
When I was ordained in 2000, my son joked "my mother is a father." So the name. I worked as a scientist for over 30 years, first in Boston, then LA, San Francisco area, Denver, D.C, Vienna and back to San Fran. Good training for an interim who has served in Eastern Michigan, Wyoming, California and now Maine. Isabelle, the little white dog, better known as Izzie has her own blog now. 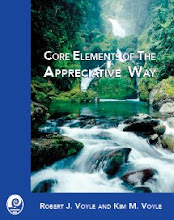 Rob Voyle has been instrumental in my work as an interim. I highly recommend Appreciative Inquiry as a way of looking at life in a parish, or for life in general.

"Yet its [science] enthralling account is not sufficient by itself to quench our thirst for understanding, for science describes only one dimension of the many-layered reality within which we live, restricting itself to the impersonal and general, and bracketing out the personal and unique."  In the preface to "Exploring Reality: The Intertwining of Science and Religion" by John Polkinghorne

Icon of Our Lady of Vladimir 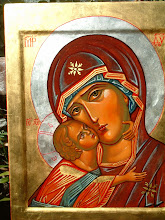 wrote this icon under the direction of Alekandr Kharon. It sits in the Lady Chapel of All Saints, San Francisco

New things happen in regimes that we have learned to identify as being 'at the edge of chaos.'  Too far on the orderly side of that frontier and things are too rigid for there to be more than a shuffling rearrangement of already existing entities.  Too far on the disorderly side and things are too haphazard for any novelties to persist.
John Polkinghorne, Exploring Reality:  The Intertwining of Science and Religion. 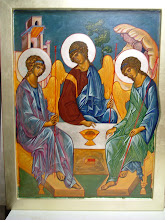 wrote this also under the direction of Aleksandr Kharon. Given to Bp. William Swing, California at his last visit to All Saints'

Isabelle in her basic black 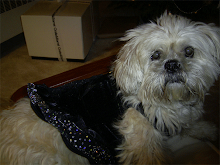 That woman has no sense of shame. It's a good thing she didn't snap a photo of me walking across the street with my purple purse in my mouth.